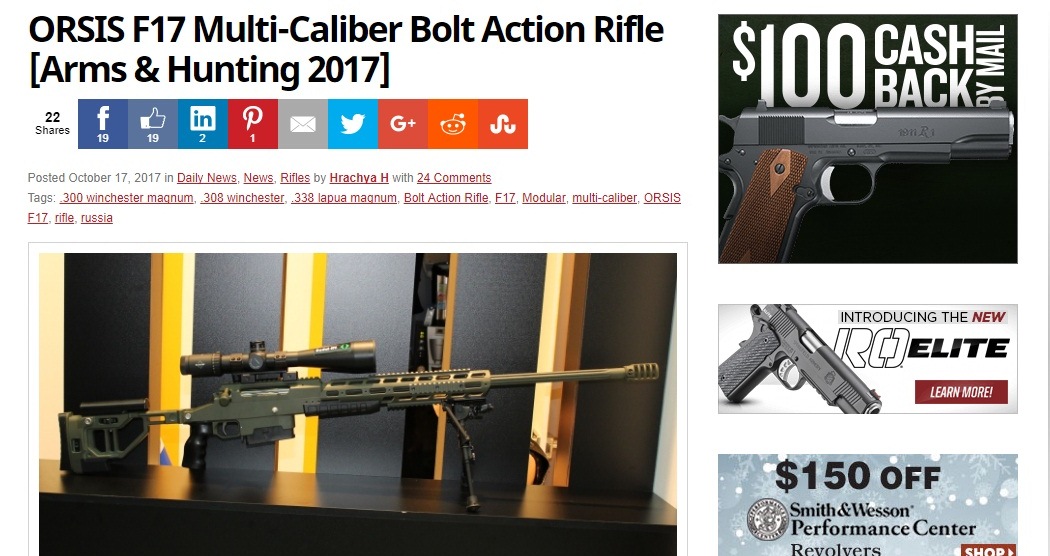 ORSIS has introduced a new modular sniper rifle with the possibility of quick changing the calibers. The model designation is F17 and it was first shown during the Arms & Hunting 2017 exhibition held in Moscow, Russia. In order to change between the .338 Lapua Magnum, .300 Winchester Magnum and .308 Winchester, one needs to unscrew the three Allen head screws, remove and change the barrel, change the bolt head and install the proper spacer into the magazine.

The bolt locks into the barrel extension hence no headspace adjustment issues arise when changing the calibers. ORSIS F17 has a 3-lug bolt and aluminum receiver/chassis. The handguard and stock are interchangeable with the ORSIS T-5000 rifle. The F17 rifle weighs 7 kg (about 15 lb 7 oz) with an empty magazine and without the scope. The overall length is 1,305mm (51.4″) with a barrel length of 660mm (26″). The manufacturer claims a sub 1/5 MOA accuracy at 100 meters with the .338 Lapua Magnumcartridge. The rifle is fed from a 10-round detachable box magazine. The stock of the shown rifle folded to the right side, however, the ORSIS officials said that it might be redesigned to fold to the left side of the rifle. Overall the fit and finish of the rifle looked good and the action was operating fairly smooth.